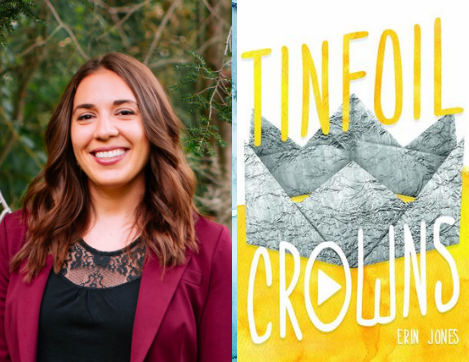 May is my birthday month, and there are some AMAZING books that I feel like are my own personal birthday presents from the Novel19s community! Here we goooo!

Seventeen-year-old internet video star Fit is on a mission to become famous at all costs. She shares her life with her fans through countless videos (always sporting some elaborate tinfoil accessory), and they love her for it. If she goes viral, maybe she can get out of her small casino town and the cramped apartment she shares with her brother and grandpa. But there's one thing Fit's fans don't know about her: when Fit was three-years-old, her mother, suffering from postpartum psychosis, tried to kill her.

Now Fit's mother, River, has been released from prison. Fit is outraged that River is moving in with the family, and it's not long before Fit's video followers realize something's up and uncover her tragic past. But Fit soon realizes that the only thing her audience loves more than tragedy is a heartwarming tale of a family reunion. Is faking a relationship with River the key to all Fit's dreams coming true?

Introduce yourself and your debut novel!

Hello! I’m excited to be here. I’m Erin Jones and my debut novel, Tinfoil Crowns, comes out May 7 from Flux books. The novel follows YouTube star Fit as she tries to become famous at all costs. Fit shares every part of her day with her fans, and they love her for it. But there’s one thing her fans don’t know: when Fit was three-years-old, her mother, suffering from postpartum psychosis, tried to kill her. When her mother re-enters her life, Fit is forced to choose what’s more important: family or fame.

What’s the most surprising part about your debut journey so far?

The amount of support and excitement I’ve received from all my friends, family, and colleagues. People I haven’t spoken to in years have reached out to tell me how excited they are for me, which has really meant a lot to me. Also, when my book was listed as one of Barnes & Noble’s most anticipated indie YA novels I called my dad to let him know and he started to tear up--it was the sweetest thing! But I was not expecting that reaction at all.

Give a shout-out to a fellow debut!

I recently read If You’re Out There by Katy Loutzenhiser and it was such a pleasure to read. Mystery, wonderful female friendships, Instagram--it has it all! I also loved fellow Flux author Nikki Barthelmess’s The Quiet You Carry.

Who is your favorite character?

That’s such a tough one! I love Fit with all my heart, but she can be kind of a brat sometimes. I’d have to say I had the most fun writing Frankie, Fit’s little brother. He’s fourteen and the quiet artist type. And throughout the novel he keeps on creating these different pieces of art that coincide with what is happening in his life. Coming up with the different art pieces and trying to describe them through prose was such a delight.

How long did it take you to write this book?

I had the spark of an idea in mid-2015 when I wrote a short story about the Fit and her family. The story ended up being 25 pages and after I turned it in for workshop I couldn't stop thinking about the characters. Over the next few months I kept writing notes, possible scenes--the type of writing that is basically stream of consciousness but is necessary in helping me get to know the characters and story. Then in September 2016 I started, in earnest, from the beginning of chapter 1. The first half of the novel was my master's thesis, and then I finished the first complete draft in October 2017. I revised for a few months and then started submitting. After Flux made an offer on the manuscript in April 2018, I then spent four months editing (what an intense four months!). I know this isn’t a straightforward answer, but there were so many different steps to the process.

What's a cool thing about your book that isn't in the blurb?

A cool thing about this novel that isn’t in the blurb is that about a third of the book is told from River’s (Fit’s mother) perspective. This is something that tends to surprise people when they first read it because having an adult voice in a YA novel is not conventional. But as I was writing the book just didn’t feel right until I added River’s perspective. I also think that having River’s side in the story adds so much to the journey that Fit takes in this novel.

Describe your main character in 3 words.

What advice would you give to a new writer?

I teach writing at Emerson College and I get this question a lot from students. The two main things that I tell them are to write every day and to “just keep going.” There were so many days when I was writing Tinfoil Crowns that I would wake up and think “What the heck am I going to write about today?” But I would move past that initial fear, sit down, and start writing. There’s so much uncertainty that goes into writing a novel. It’s such a daunting task! But I’m always calmed by the idea that no matter what happens or what is going on in my life I am going to wake up the next morning and write.

The tiniest, cutest little apartment in Boston. To be more specific: at my desk in my (very small) studio apartment. My desk is right next to a window that looks out at a quaint Boston street. I’ve never been able to write around people. I need to be by myself and in complete silence. One of the reasons I decided to move to my current apartment and have stayed here for many years is because it has such a great writing vibe.

How do you develop your plot and characters?

I do a ton of writing before I even start to compose something that resembles a first draft. Seriously, I have boxes and boxes full of yellow legal pads that are filled with writing that I will never look at again--but for some reason I just can’t part with them.

What is your writer patronus?

A big ol’ cup of coffee. No cream. No sugar.

What book or author has most influenced your own writing?

Tim O’Brien’s The Things They Carried is a book that I’m always trying to live up to. It’s such a beautiful, human, and heartbreaking story. The way that he uses the form of the linked short story to build a narrative is masterful. I read it about once a year.

If you could buy only one book this year, which book would it be?

It’s fitting that the first book I bought this year would be my choice if I could only purchase one book this year: My Year of Rest and Relaxation by Ottessa Moshfegh. It’s unlike anything I’ve ever read before, and I couldn’t put it down. Even though the novel spends most of its time with only one character, the reader is put into this fascinating, dark and sometimes disturbing world.

Can I just share the link to the Bon Appetit YouTube Channel? I’ve grown to love all the chefs from the test kitchen! Especially Claire. https://www.youtube.com/channel/UCbpMy0Fg74eXXkvxJrtEn3w

Link to a favorite song!

“These Few Presidents” by Why? is the most played song in my iTunes library. So I guess I like it! https://www.youtube.com/watch?v=WT_bgCcStCw

Thanks for interviewing, Erin! Check out her book on 5/7/19!